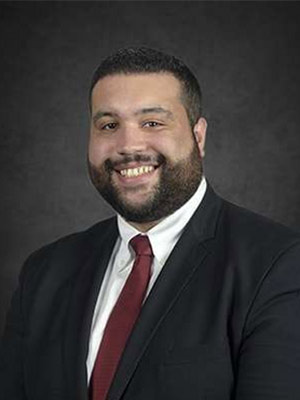 Born in Boston, MA but raised in Queens, NY, Harold Velez moved to Fort Myers, Florida at 13 years old and has lived in Florida ever since. Mr. Velez graduated from Stetson University, in Deland, FL, with a Bachelor’s Degree in Political Science and minors in Business Law and English Creative Writing. After graduating from Stetson, Mr. Velez was given the Legal Promise Scholarship to attend Stetson University College of Law.

During his time at Stetson Law, Mr. Velez was admitted into the school’s nationally-ranked and prestigious trial team, competing across the United States, most notably in Florida, Houston, and Los Angeles.
In the first two months of practicing law, Mr. Velez was successful in his first trial in Naples, FL. In the short three years since he’s been in practice, Mr. Velez has tried over 7 cases and has argued in front of the 2nd District Court of Appeals.

Prior to joining Kanner & Pintaluga, Mr. Velez worked for one of the nation’s largest personal injury firms, fighting for the people. Today, Mr. Velez continues that fight at KP and is eager to represent those in their desperate time of need.